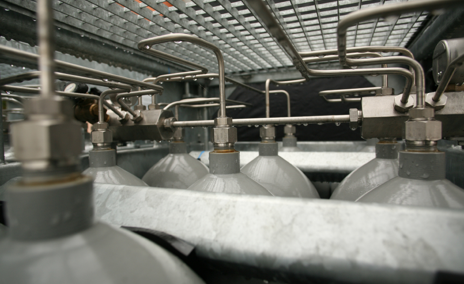 Helium is one of the rare gases of the atmosphere, present in a concentration of only five parts per million. Helium is the second lightest element; only hydrogen is lighter. Helium is chemically inert. It has no odor, color or taste. Helium has a boiling point of -452.1 F, and is the only substance that remains fluid at temperatures approaching absolute zero making it the coldest liquefied gas. Helium has high thermal conductivity and does not become radioactive. Helium is used in a variety of applications that capitalize on its unique properties. The extreme low temperature of liquid helium makes it ideally suited for use in low-temperature superconductivity applications such as MRI (Magnetic Resonance Imaging, a diagnostic tool supplementing Cat-scans & X-rays) and other cryogenic research. In gaseous form helium is used as a shielding gas for GMAS (MIG) and GTAW (TIG) welding, and in aerospace exploration, it is used to purge and pressurize hydrogen-fueled rocket engines and other propellant systems. Gaseous helium also is used as a non-reactive carrier gas for semiconductor and fiber optic waveguide manufacture, as a leak detector, as a component of deep-diving breathing mixtures, as a nuclear reactor coolant and for balloon inflation.

Helium is obtained as a by-product of the processing of natural gas. Natural gas fields, located in Kansas, Oklahoma, Texas and Wyoming, provide most of the helium produced in the United States. The United States supplies about 90 percent of the world’s total demand for helium; the remainder comes from plants located in Poland and Russia.

Helium is shipped as a cryogenic liquid in containers and trailers, holding quantities as large as 15,000 gallons or in dewars with capacities ranging from 30 to 1000 liters. It is also shipped as a high-pressure gas at or above 2200 psig in cylinders and 2640 psig in bulk tube trailers.

Helium is nontoxic. Its major hazard is asphyxiation when it has built-up in an area and displaced the air (oxygen) needed for breathing. Brain damage and death may occur when oxygen levels are below 19.5 percent. Helium is an inert gas that cannot be sensed by odor, color or taste. It is difficult to know when helium is present and when it may be depleting the oxygen needed for breathing. It must be used in well ventilated areas. Efforts must always be made to avoid leaks or venting of these gases in confined spaces. Do not work with any inert gases in confined spaces such as tanks, pits or tunnels unless an adequate breathing air supply is available. Always provide good ventilation in enclosed areas where gases may be present.

Liquid or cold gas helium can cause frostbite-type burns. The eyes and lungs are especially sensitive to the cold vapors. Protect eyes and skin from exposure to these low temperature materials. Wear protective goggles, gloves and clothing where cold liquid might be spilled or splashed.