Originally featured in The Journal-Courier in Jacksonville, Il., this story is a follow-up to a previously featured story on ILMO’s site. Congratulations to Westermeyer Industries, John Wood Community College, and all of the new welding students in this program!

Welding class a product of synergy

Jacksonville, IL – The Journal-Courier: Four key players, it was a matter of wanting to see the same thing happen. 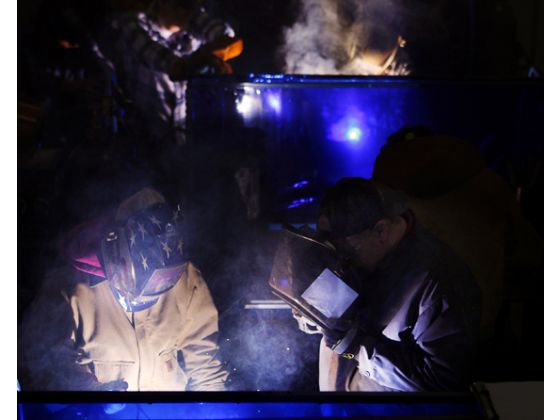 A rural school district, a manufacturing industry, a community college and a products company joined together to start a dual credit welding class at Westermeyer Industries, 1441 Ill. 100 in Bluffs.

Five juniors and seniors from Bluffs High School are enrolled in the program and will finish with a welding certificate — juniors, on par with graduation, seniors, a little later, Superintendent Andy Stremlau said.

It was implemented for Bluffs School District in the fall. ILMO Products Co. at 7 Eastgate Drive donated new welders.

As a Bluffs school board member, Gary Westermeyer has been concerned for a couple years about the lack of vocational and technical opportunities for students, he said.

“We spend most our time trying to train students to pass a test so they…  can go to a four-year school,” he said. “A lot of students don’t have the desire for a four-year degree.”

Martin believes the manufacturing sector is underrepresented in terms of potential because of perceptions that everything has been outsourced, he said.

“If you study the information, a lot of it is coming back because those countries are increasing their median wage,” he said. “It’s becoming more expensive overseas to manufacture.”

Many companies are seeking skilled tradesmen who have highly technical skills that require training.

“You have to know how to think, do math and work with other people to figure out how to take a project from an idea to actuality so that it’s built with quality and accuracy,” he said.

“It’s our job to help, particularly when the economy is so difficult and people don’t have the money they used to,” Martin said. “We have to help them see there are some great opportunities to have at a much lower cost.”

The number of machines limits the class size for welding, but the satellite course is operating at capacity with 12 students.

Incumbent workers from Westermeyer Industries are also taking the course, which makes it an inter-generational endeavor.

“We hope we might be able to hire some of those people in our company,” said Westermeyer, who has seen a lack in skilled labor. “It’s been a pretty rewarding experience and we’re overjoyed to have 12 students right off the bat. There was a concern that we wouldn’t get anybody.”

Westermeyer Industries would like to offer two or three other courses for machinists, electricians or computer drafting. If the welding course increases in popularity, perhaps two courses could be offered.

Westermeyer would like this to eventually be opened to neighboring school districts as well.
“We had a pretty synergistic collaboration going on,” Martin said.